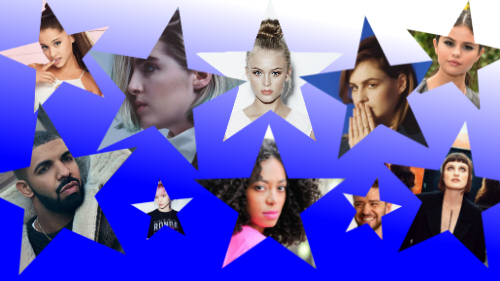 I'm emerging from blog hibernation to post my annual Top 10 list. Hopefully this will prompt a bit more posting in the new year... Fingers crossed.

As usual, my Top 10 is compiled using the play counts in my iTunes library, keeping me honest about the songs I actually listened to, rather than the ones that sound cool. So here they are, in reverse order...


10) Muna - I Know A Place
Brand new girlband Muna put on one of the best shows I saw this year, deep underground in London's Notting Hill - and this was the highlight: A great big exuberant hug for the LGBTQ community (lead singer Katie Gavin wrote a moving essay about the lyrics in Time Magazine, which is well worth a read).

Played live, it's one of those coming together moments, where the whole club - from the cloakroom to the drum riser - jumps up and down in unison. The recorded version loses some of that energy, but emerges as a terrific singalong, nonetheless.


9) Zara Larsson - Lush Life
When I first heard Lush Life, I thought it was Rihanna. But apparently she only does life-affirming pop songs for Calvin Harris these days, leaving an open goal of Zara Larsson to score one of the year's biggest breakthrough hits. Looking forward to the album next year...


8) Shura - What's It Gonna Be?
This would have made it into the Top 10 for the John Hughes-inspired video alone. But luckily What's It Going To Be is also a perfect happysad pop banger in its own right, so everybody wins.


7) Ariana Grande - Into You
I wished Ariana Grande's Dangerous Woman album had been a little bit more... well, dangerous. Imagine if she'd fully committed to the promise of the title track, recording a dozen dusky showtunes, draped over a piano like Michelle Pfieffer in The Fabulous Baker Brothers. It could have been a classic. But then we'd never have gotten this - a sexy, synthy prelude to an historic romp under the sheets.


6) Selena Gomez - Hands To Myself
"I mean I could, but why would I want to." It's the sort of line Lauren Bacall would have said to Humphrey Bogart in the 1940s, but in a pop song. Amazing.


5) Drake ft Kyla and WizKid - One Dance
Confession time: I can't stand Drake. His drowsy, monotonous voice is my own personal chloroform. And yet... and yet... One Dance is just so deliciously moreish.

Maybe it's Kyla's coy, come-hither hook; maybe it's that outer space piano; or maybe it's the sinewy, arabesque guitar line. But it gets me every time.

4) Grimes - Kill v Maim
According to Grimes, "Kill v Maim is written from the perspective of Al Pacino in The Godfather Pt II. Except he’s a vampire who can switch gender and travel through space."

Amazingly, it comes close to matching that description; while the visuals look like a Manga cartoon and a sweet shop threw up over Michael Jackson's Bad video. A signpost for the future of pop. In 2187.

3) Christine & The Queens - Tilted
A dance track about being so awkward, your feet won't do what you tell them. A work of genius in both the English and original French versions.


2) Justin Timberlake - Can't Stop The Feeling
Total fluff. A flimsy song for a flimsy film. But put Justin Timberlake in the same room as Max Martin and you're guaranteed some pop magic. Listen to the playful way JT elongates the word "aaaaaaand" in the chorus; Or the casual way they throw in a gargantuan sing-along hook in the last 20 seconds, forcing you to rewind and start again, just to get more of that exquisite sugar rush.


1) Solange - Cranes In The Sky
My favourite single of 2016 was, in fact, written in a hotel room in 2008. An essay on depression and escapism, it was kept in a drawer for eight years, until Solange dusted it off and used it as a template for A Seat At The Table. Like the rest of the album, it's an elegant, dignified response to harrowing experiences, and a truly exceptional song.

I couldn't resist it - and nor could my kids (which might explain the higher-than-expected placing in this countdown, to be fair).

It was a good year for singles. So, if you're interested, the next 10 would have been: